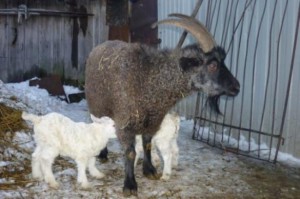 Photos, description of the Don breed goats, characteristic for home breeding and maintenance

We introduce you to rock with excellent feather qualities, which are known throughout the world – Pridonskaya breed goats. Sole opinions about the origin of the breed is not available. The only thing on which experts agreed, is the fact that the blood of goats Pridonskaya have an admixture of local gruboshёrstnyh goats and Turkish, it refers to 1811. The next step in the development and improvement of the breed took place in the late 19th century, when added another and the blood of Angora goats. After this, the mixing of bloods experiments stopped, and breeders do only special selection within a breed. Nowadays, already known the Don goats crossed again with angora, thus, a new kind of breed the Don – goat with white coat color. These animals are very fond of the open space, so most of the time they need to keep on roaming. For cultivation in the home, on small farms or farms – very profitable breed. Mainly bred in the eastern territories of Uzbekistan, the Urals, Kazakhstan and many other countries.

Exterior Pridonskaya goat is not very beautiful. Tulupyev large, tight with well-developed muscular system. The belly is a little slack to the ground, back straight. They belong to the type of precocious, so young very quickly gains weight and becomes like an adult animal, so sometimes difficult to distinguish between young and mature goats. The breed does not establish any weight or producing records, but are stable when the average content in the home.

Wool pretty thick and strong, up to 6 cm, the interesting fact that the length of the fiber of guard down and make up 9-10 cm. This is very unusual, because most breeds of guard hair is much longer than a feather. The most beautiful and long hair grows in winter: More for the warm days in the Don goats grow new hair, which is thicker and longer, and also will change color, it becomes more saturated gray. After the end of cold weather begins to fade fluff, and then begins to fall and the old hair that grew in its place again, a new and warm. Just at this time, farmers and produce shearing goats to get valuable fluff. The amount of down for one haircut could be about 0.5 kilograms, while improving conditions can get up to 2 kg of lint. The older the animal, the more fluff can shear. The quality of the Don down goats is 70, with a fineness of about 19 microns. In general, it turns out approximately 80-90% of down with the hair that you want to separate from each other, and this is done mostly by hand, so spent a lot of time. The greatest measure of prized white fluff, it turns more. With the Don adult goats with white fluff you can get an average of 1.5 kg, and with a gray goat about 1.3kg. It differs and down the length of white individuals, it is usually 2-3 cm longer than in animals with gray coat color.

Despite this, both varieties are very popular among farmers. The fact is that if a goat with white feather down indicators have higher gray, the quality and productive dairy slightly lower. Also, the white fluff of gray much less if we compare all these qualities, then we can say that the two species have high productive qualities that are not much inferior to each other.

Breed Pridonskaya goats belong to the middle-a heavy type, so do not differ a great live weight. Adult goats reach 40 kg, 70 kg and goats, if conditions of increased comfort, it is possible to grow the male weighing about 100 kg. Pridonskaya goats have a well-developed maternal instinct, usually lead to twins, rarer Odintsov and triplets. Goats are not born great – about 2 kg. In breast milk goats quickly start to grow and develop. When young weight becomes about 15 kg, they are weaned from their mother and begin to feed forage for adults. Meat obtained is not too much to an adult, but, nevertheless, its active use as food. With one animal goes up to 60% of meat production dairy indicators are also at the secondary level. Lactation lasts about six months, during which time a goat can produce up to 170 liters of milk with a high fat content (from 3 to 8%). Dairy and meat quality of non-uniformly transferred to the next generation, the only thing that is passed through the low-lying – down is quality. Use also clean skin Pridonskaya goats, sell it for further processing and production of things.

Experienced farmers determine the season haircuts on the behavior of the largest queens. It is in their first molt begins, the first signs manifest themselves in the form of fibers, which are beginning to curl. The well-fed ewes and goats wool begins to topple before the others, so the spring time period is more likely to pay attention to them. If the Don goat a lot of wool, its vychёsyvayut in several stages with an interval of 15-20 days. To make the carding process is much faster and more productive you need to prepare in advance. To Pridonskaya goat not cool during the process, it is associated limb and settle on the floor. Work need special comb, which is built in such a way, a hundred down and wool will not be entangled. You should begin with the neck, then chest, shoulder blades, hips and back. The only place where it is better not to touch the wool – a ridge, down there, and so little, and if it is combed, then with the onset of cold weather can freeze the goat.

Experienced farmers cut their hair not only in adulthood but also for the 4-month kids. Doing so is not mandatory, but because at that time young fades, you can help him to lose the old fluff and sell it at the same price as that of an adult animal. However, the shearing of the young is relatively small – about 100 g

Pridonskaya goats – is amazing animals, which combine the meat, dairy and feather productive quality, and therefore enjoyed so much success among the farmers. Another advantage of the animals – is a high level of adaptation to any weather conditions. But if the climate is very different from the mother, then for a while productive quality may be slightly reduced.