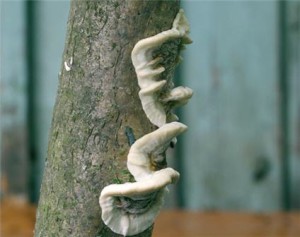 Despite the strange name, we are all familiar with this. These are the small growths on the trunks of old, already almost dead trees that once they settle the mushrooms begin to rot and die. Feature berkandery that it is ubiquitous, and the weather does not affect its growth – you can meet her in the street in any season.

Poisonous Mushroom Bjerkandera Adusta has a different appearance in any stage of their growth and maturation. First, it is simply incomprehensible shapeless education on a tree trunk or stump, with the growth of the center of this education is becoming darker and fungus edge clearly stand out and fall. The thickness of the resulting cap is only half a centimeter and a width of 3-4 cm. The surface of the cap to the touch, it is incredibly similar to felt.

Brkandera not for nothing called a scorched because developing edges mushroom cap change color from white to gray-brown, as if they were burned. The flesh of this mushroom in gray, very hard, and lowered down.

In berkanderas thin Hymenophore and spores are very small. From its sterile part of it is separated, but this limit can not be seen with the naked eye. As well as the edges of the cap, the whole mushroom was originally a light color, but darkens more and more, becoming almost black fungus.