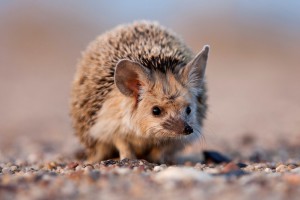 Long-eared hedgehog, the contents in the home, the description and photo

Eared hedgehog – small mammal that inhabits the territory of South Asia. A distinctive feature of this breed is a huge oval-shaped ears. They are a little sharp to the top. Their length of about five centimeters. The head does not have needles. It is covered with sparse fur gray hue. Needles cover only the back of a hedgehog. Eared animal muzzle elongated, long nose. Animal has short, black mustache, black eyes the size of a pearl. The legs are long, thin. Present pronounced fingers.

Meet eared hedgehog can be in the desert, sparse forests and plantations. This breed animals actively populate the territory of the Eurasian continent. Now they live in Russia, India, Turkey and other Eurasian countries.

They feed on hedgehogs animal feed plant. They eat everything found. Often there is a variety of insects, grass, rodents, frogs, small birds. animals also feed on fruits, vegetables. Each creature has its own taste preferences. Some people prefer insects, someone – grass. Eared hedgehog does not build houses for themselves, as often does not stay in one place. They spend the night under the open sky. Females are hiding in the bush. Hedgehogs can not tolerate the heat, so the special activity of the animals observed in cloudy weather in the morning, in the evening. Almost all the time hedgehogs looking for a meal. Especially appetite wakes up in the summer. Therefore, the fall, they are gaining a lot of weight. Due to the change of temperature the animals hibernate. It usually occurs in late summer. Sometimes hedgehogs sleep in September. In the middle of spring animals awake. During the “hunger strike” they strongly grow thin. A week after hibernation, hedgehogs begin to multiply massively. Shortly before the birth of cubs, the female begins to seek refuge. More often it are burrows of rodents. Since they are small in size, the female burrows reworks. In early summer hedgehogs born. The first week they were defenseless, do not respond well to the environment. Two months later, defenseless babies begin an independent life. At the age of two hedgehogs can create their own family. In the wild, animals live up to four years in captivity urchins life expectancy doubles. Continuing conflicts arise between members of the family. Animals compete for females. The interesting thing is that after the first sexual intercourse female can not have contact with other partners, is give birth. The male takes no part in the lives of children. After mating, the female he leaves. A healthy hedgehog can give birth to eight cubs at a time.