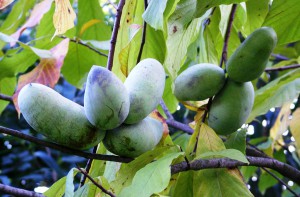 Growing Pawpaw in open ground in the home, description, tips and photos

Pawpaw brought to Russia in the early XIX century. In the fifties of the last century in the Soviet Union created in the northern part of the Caucasus a huge plantation, where it was possible to grow pawpaw Trilobite or Mexican banana. The locals, eating fruit, not hurt poisoning, their long-term use rejuvenates the body and get rid of all harmful products and their effects on the body. So what is this wonderful fruit – Pawpaw.

This culture is considered to be for the lazy, because it is not susceptible to the disease, and does not have parasites, which bring her harm, loves shady areas and is easy to care. Pawpaw Trilobite – a very rare fruit tree, country, whose southern and eastern part of America. In the modern world it is growing in Spain, Italy, Ukraine (Crimea), Russia (Black Sea coast of Krasnodar region). It – antifreeze tree can withstand temperatures up to – 30 ° C. It has ornamental value in the form of a pyramid of leaves and very beautiful bark, large leaves, about 30 cm, the flowers, too large, in the form of bells, diameter, which is 3-4 cm., Purple or reddish color.

The inflorescences appear before the leaves, and lasts three weeks. Fruits are formed in August and have the shape of elongated cucumbers and weigh 30-800, the yield per hectare may be up to 10 m. Exterior color unstable in the process of maturation, in the beginning it is light green, after becoming lemon-yellow at the end, dark brown . It is this fruit color and says that it can be used.

If you break down the fruit, there lurks a whitish-yellow flesh, its structure is similar to butter. They can be eaten fresh as jam, marmalade, syrups, confectionery. However, they can remain for only a month, and after that they were either processed or eaten.