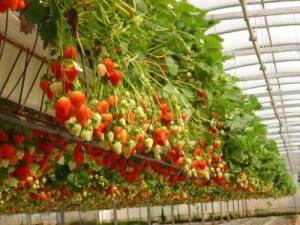 Strawberry on shelves and in drawers, with their own hands

Prior to the cultivation of strawberries on the shelves, I had to bend his back, tired. Previously, weeding the weeds almost every week, and it seemed there was no end. Yes, and boroznyak (young beetle), wintering in the soil, eat the roots of the seedlings dry out so quickly. Costs were higher than returns.

He began to look for alternative technologies. On one such technology, which is successfully applied in the Netherlands, I have read in the literature. “Swig” – the so-called progressive novelty – interested and intrigued. However, as an experienced gardener, I did not immediately decided to experiment.

First of all, because it is difficult to overcome the psychological barrier, he doubted that the strawberries will feel comfortable in plastic boxes on a shelf. Still I decided to try.

In the spring, April 18, carefully prepared soil mixture of humus, sand and black earth, in each container dropped six bushes, covered with white agrovoloknom. After two months, I think, I will collect a bountiful harvest.