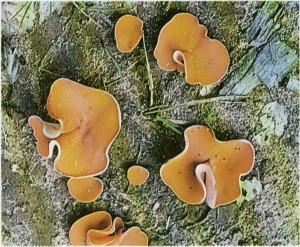 Edible mushroom peziza orange (Aleuria aurantia) is distributed in the coniferous and mixed forest types, quite often you can find it on the outskirts near the road, on the ground with a good hit of sun rays. The period in which the fungus peziza orange fall into the area of ​​your view will be the end of August – beginning of October.

Mushroom peziza has a unique shape, which at first glance does not say that it is a fungus. It is a form of fungus and made interesting for mushroom pickers. The diameter of the fungus can reach 10-12 cm. The color varies from brown to slightly orange. The pulp has different taste, and smell as well.

Many authors refer to the orange mushroom peziza inedible mushroom species only because of its shape, which is not exactly cause some or trust, however, the fungus is really edible, though not very popular among mushroom pickers.