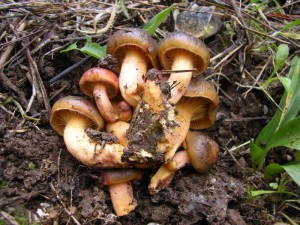 Edible mushroom mokruha purple (Latin Chroogomphus rutilus.) – It is quite delicious and edible mushroom in the family gomphidiaceae.

Hat young mushroom species mokruha purple reaches a diameter of approximately 5-8 cm. The shape of the cap is round with a small hump in the middle. Color – dark-brown with a little red tint. At the touch of a hat is smooth, lightly covered with a mucous film. Leg lifts the bonnet to a height of 6-10 cm. The form of the legs slightly bent.

The best time to search for mokruhu purple will be the beginning of August to early October. Basically, edible mushroom mokruha purple likes to grow in the pine forests.