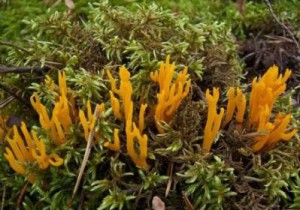 The fungus inedible calocera adhesive (Calocera viscosa) resembles its shape coral or even strange algae, yellow. One thing I can say at once – a mushroom the “Coral” is not exactly similar.

Mushroom calocera adhesive dwells on the dead, rotten logs, stumps and only conifers. In the forest you can perfectly mix up caloceru sticky with her cousin – a mushroom Calocera cornea. Calocera horn is characterized by its fragility and the habitat, as a rule, you will find them directly on the soil..

Calocera adhesive is inedible fungus and it is not used in cooking, at the same time, the adhesive calocera not poisonous mushroom, and will not cause any harm to your health.