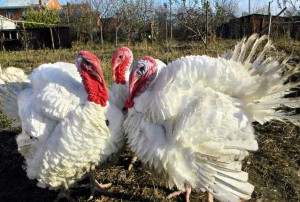 Presented breed turkeys heavy cross is also known as the Big 6, which in English sounds like Big-6. Turkeys are considered the breed quite popular compared with other poultry such direction. Their main reasons for the great popularity among the poultry farmers are in a high-quality meat products, intensive growth and development, as well as a good level of reproductive processes. The present diversity of turkeys originally possessed direction with great live weight. The first representative of the Big 6 has appeared on the Great Britain territories (British United Turkeys Limited). Nowadays this stamp is an application Aviagen Turkeys Limited, which is one of the most famous companies in the world. In addition, the company also acts producer of turkeys, having crosscourt BYT-8, which in English sounds like BUT-8, it is known to be a turkey with a rather small weight category, in addition Aviagen Turkeys Limited established as turkey of average weight, which was given the title of the BYuT-9 (BUT-9).

With regard to the conditions provided by the variety of big-6, then it is necessary to create all conditions so that the birds can develop well and grow rapidly. Despite the fact that the breeding of turkeys not only requires a lot of effort, but also a lot of quality fodder mixtures in the final results all the lost funds are justified. One of the most common cross – are heavy direction. Mature males have a live weight of 20 to 26 kg, and the representatives of the female sex, in its own turn, are swayed by weight, in the areas of ten kilograms. Meat production is often superior to members of other species. Practically proved that male broiler Big 6 produce 16-18 kg of meat and meat characteristics of the average female big 6 show meat content of 5-8 kg.

Consider some of the exterior characteristics of the species represented. So, without limitation, all the representatives of the Big 6 have almost completely snow white plumage, which is not noticeable different dirt or spots of other colors (at least found something like this is extremely rare). Especially in the plumage is black except a little bundle of perinok on the chest. In size, the male representatives of turkeys Big 6 turkeys are far superior. This is evident in a convex and a deep chest area, neck of the very broad. In addition, the turkeys are growing much more rapid and intense gaining quality meat than females.

The average live weight of the chest on the background of the entire carcass is approximately 35%, which is consistent, rare in turkeys. A self extracting meat from the body is equal to between 85% and 95%. Among all existing representatives turkeys heavy cross, similar results are considered a record. Indeed, the percentage of the output of high-quality meat products at the big 6 is striking.

Scientists have conducted their own investigation of poultry species represented. To do this, they analyzed a group of turkeys during the period: from birth to adulthood. On this basis the average data now exist for those who are planning in the future to breed big 6. For 90-100 days (approximately three months) males develop up to five kilograms, and females up to three. At the age of 150-160 days (about five months), the turkey has a weight of about 17 kg, and the turkey – in the areas of 12 kg. As for broiler turkeys this breed, they develop much steeper. So, at the age of 30-50 days (a month and a half), the weight of the birds waver in areas two to three kilograms.