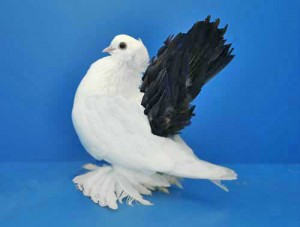 During the 19th century, scientists began to conduct experiments on the conclusion of a new species of pigeons. As a result, the light of a new breed – Novocherkassk black-tailed pigeons. Presented birds were the most common form, had quite narrow tails. The name of the variety of pigeons after the place of their initial breeding – Novocherkassk (Russia). Produced breed was complicated methods of selection and transfusion Poltava black-tailed pigeons. At the end of the study, fanciers have achieved good results.

Newly birds were perfect shape, and has an incredible resemblance with representatives kachunov pigeons. Novocherkassk black-tailed pigeons are not different special flight data, it is known that birds fly is bad enough, so all of their parts is defined as decorative species.

For its own conformation characteristics, birds have the following data: feather forelock in a small head that moves smoothly in the mane; profusely around the perimeter of feathered legs; There are also special person in Novocherkassk pigeon species that have a black badge on the forehead. Externally bird species represented almost entirely covered with rich snow-white color of the whole body. On the wings, the bottom of the neck and head are darker shades of white (sometimes cream), and in the area of ​​the flaps and the upper part of the neck – a clean and bright. In this white coloration casing harmoniously looks black, mottled color of the tail, which betrays a beautiful, original contrast Exterior view Novocherkassk pigeons.