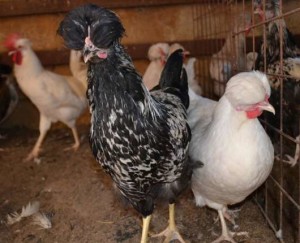 In the second half of the 19th century the breed laying hens Russian Crested was widespread among Russian and productive poultry, because it is in these birds was the last time of correctly designed standard Russian domestic chicken. They are bred in specialized poultry farms and preserve as a genetic reserve kollektsionariyah.

Breed focused on meat and egg productivity. Live weight of adult birds at standard rate is about 1.8 kg for chicken and 2.7 kg for males. But over time the rules have changed due to new methods of breed O, so, according to statistics kollektsionariev our time, the average weight of the chicken – 2.2 kg, cock – 3.5 kg, and the preservation of mature birds – 93%, not much less young – 91%. The average number of eggs – 150-160 eggs. Weight of approximately 55 g with cream or white colored shell. Breed Russian Crested appreciated his intense hatchability of eggs and good fruitfulness.

In these birds quite beautiful and attractive appearance, which led to their use as well as decorative. The Constitution of the breed is fairly strong, with more rounded back, wide convex breast, refined short neck, extended straight body and a well-developed tail erect. In males a little more developed kosichnye of the tail and longer legs than those of hens, but compared to other breeds, legs Russian crested birds do not stand out particularly long. The head of a bird a little long, with a smooth face crimson, red eyes, strong yellow beak that is slightly bent, well marked earlobes earrings and red shades, sheet-erect crest. The plumage of the birds abundant, mostly bright colors. Good plumage large and slightly drooping wings red. bird’s head is distinguished by its pronounced crest (in chickens it is emphasized more than in males). Males have a crest like a mane feathers, he seems like a fairly wide belt and is located on the back of his head. Hens also have a crest similar to the shape of a circle. Due to the fact that almost always prevents crest view of the representative of the breed, it is increasingly poultry trimmed some part of it. If it is from time to time do, Russian crested birds can not find food or water, and the bird can not navigate the expanse.