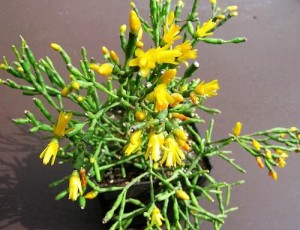 Hatiora plant, propagation, and maintenance in room conditions, photos, description of the flower

Another view of the Cactus family. It differs from its many relatives lack of thorns and leaves. The plant consists of a large number of branches, which are in the flowering period littered with many small flowers.

Appearance hatiora very impressive: upright long branches (up to 40 cm), which are more like winter tree, from which flew over all the leaves. Due to such construction plant acquired another name – dancing skeletons. For the first time hatiora awarded this title in England, there’s also generally the name of cactus dancing bones (Dancing Bones Cactus).

There is not only a problem of name hatiora, but also the existence of the genus itself. The thing is that there are two very similar characteristics kind – hatiora and rhipsalis. Scientists argue about whether it is necessary to distinguish two separate species or is it to attribute them to what that one. Sole opinion exists among experts, but most tend to be what you need to be referred to rhipsalidopsis hatiora mind.

Although scientists have been arguing for a long time about the difference between the two plants, people even without any experience in botany or horticulture can easily see it. Branches hatiora long, but are considered to be upright, but they have Rhipsalis are lowered, usually such plants are grown in hanging pots or pots. Another difference between the species is growing flowers: Rhipsalis small flowers are arranged in the sheet length, but only at the tips hatiora.

In vivo hatiora feels comfortable among the stones and rocks. Homeland Rhipsalis – Brazil, where the plant can reach considerable size (up to 2 m). The longer and the older the plant, the more stem begins to harden, turning into a timber.

Flowering period in Brazil and your latitude is not the same. In the tropics hatiora blooms in summer and in our latitudes at this time of winter. The flowers are yellow, red and pink flowers, which are on the ends of the shoots.

Hatiora summer may have called on the outdoors, such as on the balcony or in the garden, but the main thing that it is not in direct sunlight. It is best to choose a place somewhere in the penumbra. The house should be light, to keep hatiora possible on the north or west side of the windows.

hatiora summer tolerates heat, but grows at room temperature, the main thing that it did not fall below 10 degrees Celsius in winter. If the air temperature in summer a long period does not fall below 25 degrees, it is necessary to humidify the air. But the air in the house where the centralized heating system, in addition to moisturize it is not necessary. Slightly too dry air will not bring harm.

The main danger for all plants cactus family is excess moisture. Because of this, the plant begins to rot and die in the fastest time possible. During the rest hatiora should be watered very seldom and in a period of growth as the drying of the soil.

The rest period in hatiora usually in the autumn, before flowering. At this time it is better to abandon the watering and allow the plant to rest. The temperature should be moderate, but not less than 10 degrees. During this period all hatiora slows their processes therefore requires no active maintenance.

Fertilize cactus dancing bones is necessary only in the period of active growth of at least 2 times per month.

Repotting should be implemented very carefully, because the root system and shoots are very fragile and can be easily damaged. The soil can be bought ready-made or make yourself, the main thing that the earth was loose.

Propagated hatiora can be broken off by using cuttings from escaping. Their slightly dried and then take root in the soil slightly moist.