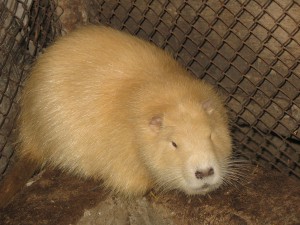 The representatives of the breed golden nutria for their own size is similar to the standard nutria, but apart from these matches, similar characteristics have no pets, because this breed is considered special and unique.

Nutri inherent interesting golden stripe along the entire length of the cap region, which has a bright orange or golden color, as compared with the abdominal region, it is dominated by a few to lighter colors. The undercoat nutria interesting pinkish hues. To the touch cover quite silky wool (which can be seen by the brilliance of hairs) and soft. Eyes beautifully combined with the base color – brown unusual color.

As for crossing two purebred pet golden varieties, nutria fans respond more negatively, in fact crossed the two golden pets, the light will be born more identical to the parent to the color of young and some of them will be the ordinary color, and the number of births would be about three or four baby, which is considered unprofitable .

If the golden breed nutria along with other varieties of species, the standard number of young in a litter will increase to six children, most of whom will have a golden hues hairs, this method is more accepted among the fans, and is much more profitable to the previous one.