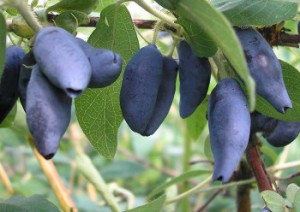 Care edible honeysuckle, growing in the country in Ukraine and Russia, how to care. How does it look. Photos and descriptions

Bush Honeysuckle edible – is another useful berries, berries which are in high demand, as well as – interest. All due to the fact that they contain a lot of Vitamin C and filled P-active substances, and of course, are composed of about 6% sugar and 2.3% acids.

Honeysuckle edible looks like a small shrub, a height of 2 meters, which is densely scattered berries in dark blue. Bisexual flowers honeysuckle allow it to self-pollinated. A distinctive feature of this bush is the ability to survive long cold, especially useful ability in the time of bud burst in spring. The frosts to -7 degrees did not cause them any harm. In nature, there are varieties that are not capable of self-pollinated, and it makes use of cross-pollination gardener bushes.

During the cultivation of all the growers will be able to see with your own eyes, how much more slowly develops very young seedling edible honeysuckle. During the first year of life seedling can rise to a maximum of 7 centimeters. After the third year of life, no longer than 50 centimeters. Only years after the bush 6 can achieve a minimum height of one meter. Fruiting starts edible honeysuckle only 4 years, given the fact that they began the cultivation of seedlings with their shanks. Fruiting from seedlings only comes to 6 years of growth.

Edible honeysuckle bush does not cause huge gardeners problematical during growth, since it is ideal for any type of land. Of course, initially it will be better to fertilize the soil. Before planting in the ground honeysuckle one meter portion is made not more than 50 grams of phosphoric fertilizers, 30 grams of the potassium salt and about 10 kilograms of organic fertilizer for faster adaptation and further development of the root system. The pit under the seedling in diameter 50 cm, depth – 40 cm. Further advance, prepare the land, which is collected from the top of the ball of soil and add a little fertilizer, and the mixture was poured into the hole, so that it goes to sleep 2/3. It is best to start digging and prepare the pit for 3 weeks prior to planting.

The ideal period for planting honeysuckle seedlings will be the end of September. So early planting carry due to early bud in the bush. During the planting must comply with the distance between the bushes (2.5 meters), and between the rows (2 meters). Care of seedlings in the spring is a timely mulching the soil with humus or manure, and do hilling plants.

I would like to draw your attention to the fact that the honeysuckle was not in need of pruning, as we used to do with each plant in the garden. Up to 15 years, the bush will always be in perfect shape. Of course, you should always watch out for branches and remove broken.

Collect edible honeysuckle berries should be selective, because they are not quite mature evenly. Berries taste quite pleasant, sweet and delicious. Long-term storage can not be. The fridge is already beginning to deteriorate on day 3.