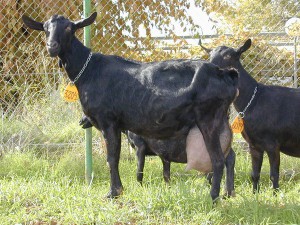 Spanish goats breed Murcia-Granada, which is actively bred in the south-east of the country. The name of the breed of the same name with the regions in which the farmers were engaged in the cultivation of goats – Murcia, Granada, Alicante. After the Spaniards increased the population of goats breed Murcia-Granada, and they began to export abroad. The first countries where got pedigree goats steel Argentina, Brazil, Mexico and Venezuela. Later, interested in this breed and “black” continent. Unpretentious and good indicators of dairy goats provided the Murcia-Granada popularity not only in Spain but worldwide.

The breed belongs to the middle-heavy type. At home, adult goat breed Murcia-Granada up to 60 kg, and goats – up to 50 kg. Wool has a solid color of dark brown or black in color, with the coat color depends on the animal’s skin, for example, if the skin is black, and the coat will be black. Since goats are grown in countries with warm and mild climate, they do not need to be thick and dense coat, it is they have thin and short. In males wool has a somewhat greater length than in goats and has a beard and horns. The ears are small, erect. The udder is fully developed, shaped and large nipples. Certainly not the big, well developed.

Murcia-Granada are not adapted to cold conditions, but in countries with hot climates, they have no equal in terms of productivity and endurance. Goats graze in open areas, often in fields where the crop is already collected. For feeding are suitable for almost any kind of food, quite unpretentious. Even if the year has gone very dry, goats will still produce a lot of high-quality milk. The period of milk production last about 280 days, during which time a goat is able to produce 500 liters of milk, and this is not the chapel. Moreover, the milk is still very tasty useful part of the fat is 5.3%, and protein – 3.4%. Such high fat content parameters allow to produce high quality milk cheese. And all this in an extremely hot conditions!

The breed is very popular, but the main center for the cultivation of Murcia-Granada is still Spain. The population of purebred goats there is more than 400 000 thousand.