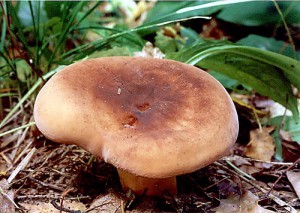 Edible mushroom podmolochnik or spurge, Euphorbia looks like a mushroom, where to look, mushroom spurge photo and description of edible mushrooms

Edible mushroom podmolochnik or spurge (Lactarius volemus) from the family of the Russula (Russu-laceae), not often can be found in our forests. Inexperienced mushroom pickers take this rare fungus to it inedible, and do not pay any attention to him at all, though, the fungus podmolochnik quite tasty and I dare to write – one of the few beneficial fungi that can be eaten without cooking.

Mushroom spurge has a very meaty hat, which can grow up to 5-10 cm in diameter. At the touch of the surface of the cap is dry. The color varies from red-brown to dark golden. If you damage the fungus at the site of damage begins to stand out juice, which is why this fungus and called spurge. Taste mushroom podmolochnika very nice, sweet. The color of the legs is almost no different from the color of the cap, pay much attention to it, not to make a mistake and do not take into his mushroom basket mushroom false.