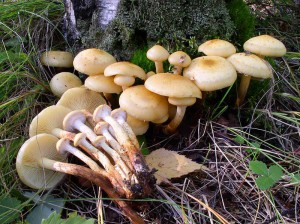 Poisonous Mushroom pholiota alder moth (lat. Pholiota alnicola) likes to grow, mainly on dead hardwood trees, usually in large groups. Appearance quite deceiving, as there is a great similarity with the autumn Estimates. The period in which the activity of this type of mushroom is considered the most is – the beginning of August to the end of September.

Cap from inedible fungus moth alder has a markedly convex shape with a small hump in the central part. At the touch of the surface of the cap a little sticky. In general the color range from orange-brown to a yellow. During maturation cap can reach a diameter of 5-6 cm. At the foot alder moth practically in most cases near the base is slightly curved and thin. As for the flesh of the fungus – it is very bitter, and also publishes a daunting smell.

Mushroom poisonous moth alder belongs to the list of non-edible and poisonous mushrooms, however, the use of the fungus in any form is prohibited!