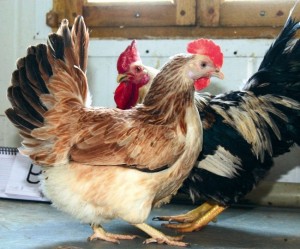 The breed chickens Zagorskaya Salmon was named in honor of one of the Russian cities – Zagorsk (currently know him as Sergiev Posad), in which it was created, during the All-Russian Research Institute. For the estimation of species scientists involved complicated crossing of Russian white chicken, Rhode Island, New Hampshire and yurlov crower. Resulting in a new breed was created, meat and egg direction, which is not whimsical in food and does not require special conditions of detention. For the productivity of live weight of an adult hen – 2.1-2.4 kg, cock – 2.5-3 kg. The average annual production of eggs – 170 eggs are creamy-brown coloring. The weight of one during the initial egg – about 47 grams, at the 35th week of life – 52 g, on the 50th – ’60 Particularly intensive egg production observed in the age of 28-32 weeks, and begin chickens scurry about 175 days. With regard to the preservation of mature birds – 85%, young – 90%. Birds have a sufficiently strong instinct pushed on, which has lost its quality over time, but still used as chicken hens.

Externally, it is a bird with a longish body and elongated, more deep chest and rather short yellow legs. The head of the representatives of small spherical with a yellowish, slightly bent beak, red earlobes and earrings, orange eyes and a small leaf-shaped ridge that gradually becomes a rather thick neck. The wings of birds abundantly wrap around the body, a little upright tail. The second part of the name in honor of Zagorsky salmon color of their plumage. Different sexes clearly noticeable gender differences, with the help of color feathers on them. In the chick is formed next Plumage: creamy-brown tail feathers and flight feathers wings; salmon color of the breast, dark brown mane. Males also possess a black flight and tail wings, shiny gray mane, the dorsal part of the light brown, black and green belly, chest and tail parts. If roosters after the formation of feathers brown or dark gray (closer to black) color of the breast or the main calico color, then these birds is considered inferior, and their color as a defect. Newborn chicks plumage bright yellow gun (sometimes with a small strip along the back and other areas).