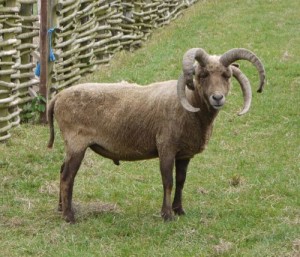 Very unusual breed Manx Loaghtan bred on the Isle of Man. From all other species is characterized by having 2-3 pairs of horns, one of which is directed upwards, the other sharp end directed backward, and if there is a third pair of horns, they are located near most of the muzzle, with their points down. But in spite of such a specific appearance, a translation name of the breed is the gray mouse. So the local nickname of sheep due to nondescript gray coat color.

Special selection and breeding have not been made. Lohan Manx breed is descended from common throughout Scotland and close it. This breed is considered to be the most common in northern Europe, and different color and a short tail.