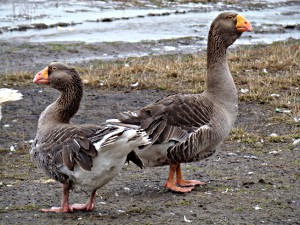 One of the most famous geese and old breeds – Tula, which was used mainly to participate in goose fights, which were very popular in ancient times and preserved to some extent to this day. In connection with the geese for sport, to the main name of the breed added popular, so it is often called the Tula geese fighting. Careful selection of the most powerful individuals has led to the fact that the breed became very strong, strong, and hardy. Exterior greatly improved and become more perfect.

Despite the fact that the rock is very strong and does not breed a large mass. But the structure of dense body, well-developed muscular system. All special breed are very similar to each other. There are only three species of geese Tula, which differ in color of the feathers. The former have a gray color and the feathers are very similar to wild geese, the second is called Kaluga, they also differ in clay color of the pen. The third type is the white color of the pen.

Another difference that you can see is a form of the beak. There can also be divided into three types: Lozhenosy, Pryamonosye and Krutonosy Tula goose. The name says it all kinds of person. Lozhenosy goose so named because of the shape of the beak, which is slightly concave inside (the upper part). In Pryamonosogo goose, the upper part completely flat without any recesses. The latter type has the following characteristics: shortened beak and curved outwards.

In the rest of the geese are very similar. All species characteristic: a small oval-shaped head with a flat forehead. The beak is shortened, strong and sturdy. A large deep chest, thick neck. Certainly not long, but very strong. In the battles Tula geese use the wings, so they are quite large and strong. A strong opponent of the backswing can be seriously affected.

Productive quality Tula geese quite low, so the production of meat, eggs or down is not appropriate. But it is still possible to meet the Tula goose, and on small farms. The breed belongs to the middle-heavy type: gander can dial up to 7 kg of live weight, and a goose – about 6 kg. The greatest weight, which can reach a goose – 8 kg. Goose weighing a little, but in these well-developed maternal instincts. Young goose per cycle can produce about 25 eggs and incubates them herself. Safety goslings quite large, they are born strong and able to resist diseases. Little goslings rapidly gaining weight on conventional pastures. Do not use special feed for 2 months the mass of goslings grow to 4 kg. In the open space of the geese feel great, they fear neither heat nor cold.

One of the most significant shortcomings of the breed is the red beak shade century eye, which is an indicator of genetic abnormalities. It is also considered unsuitable for combat Tula geese, in which the back is not smooth, with wings problems and the presence of a pair of folds of fat in the abdomen.

For spectacular events were selected only the most strong and healthy geese with aggressive traits. Contemplate on the battle between the two geese were collected whole villages in the city there were special restaurant where you could put a bet on the geese. And in the royal family fun this was considered very prestigious, and entertainment. Not one-time winners were taken all over the country and sometimes for its chapels. To geese feel comfortable and gave more and healthier offspring with them were taken a few geese. For a lot of money, you could buy a gosling from the champion of many battles.

Such even children watched fights, because this sport is not too tough. To avoid many deaths geese time battle, birds compete only with the help of wings. Wing have a very strong, but do not cause fatal strokes, as opposed to the legs and beak. Therefore, time battlefield use these body parts is strictly forbidden. And the winner is the case if the opponent is out of the chapels of the battlefield.