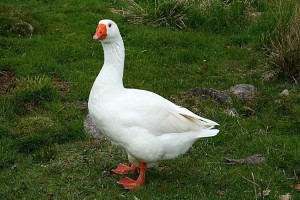 Heavy breed of geese bred in the small town of Emden, which reside in Germany. The breed gained the same name of the town where it was created.

The most characteristic features of the breed of geese Emdensk: big toe, strong physique; The back is broad and straight; not too long neck purse (special fold at the base of the neck under the beak); limbs are not too long, strong as the beak are bright orange. At the bottom of the abdomen there is a small leather fold, which is slightly slack.

Emdensk geese mainly grown for meat production. Breed ripening and quite heavy: Gander as an adult can weigh around 10 kg and the goose – 8 kg. Goslings age of 50-60 days, weigh about 4 kg. This high productive qualities, but also must take into account the fact that the goose over the cycle can produce 25-30 eggs, which is also a good indicator of egg production. Emdensk geese good weight gain on pasture, and the weight will be added quickly with additional nourishing diet. Meat products are high quality, not too greasy and tough.

Another special feature of the exhibit Emdensk geese, which in many ways is similar to their wild relatives – swans. The fact that geese born with light gray fuzz when coming 2-3 months, they start growing and shedding pen. In young animals it with a light gray changes to dark gray. In adulthood, there is another transformation: half geese are gray, the second to become gray with white patches, and only a few will become snow-white without any dark spots. White geese Emdensk very little, but they look very impressive. Most of the white geese – a male.

The breed has a good immune system and are able to resist disease and parasites. Such good health Emdensk geese acquired in connection with the permanent Besides grazing outdoors. To address this need, if there is no possibility of geese constantly afternoon have called on the street. Indoors geese will ache and feel uncomfortable.