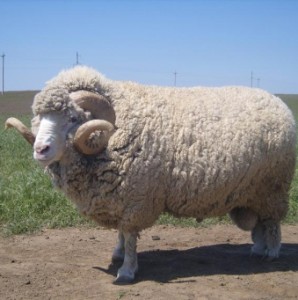 Breeds of sheep in the Altai Territory, photos, description, characteristic for home breeding

A relatively new breed, created in 30-50 years of the last century on the state of farming in the Altai Territory. From the place of origin and the name of the breed occurred. Altai breed is output as meat and wool, but it is more known for its thick, long and fine wool, which is highly valued in the textile industries. Russian Merino crossed with the American Rambouillet and later with the Australian and Caucasian sheep. To date, the largest economy on the cultivation of the Altai sheep are in the East of Russia and Kazakhstan.

Animals are large enough, well muscled, strong limbs and a rounded body. Males are large curled horns and massive head. Neck, richly overgrown with hair, is a few big folds that fall off at the most chest. Males are almost two times heavier than females: Adult sheep weight ranges from 90 to 100 kg. Altai sheep on average, lead 1-2 lambs per year.

The breed is known for its long and high-quality wool. With a mature Altai sheep can get up to 20 kg of wool, and a sheep – up to 10 kg. With sheep wool Altai produced the highest quality and expensive things.