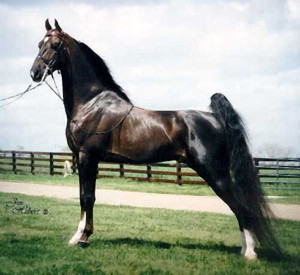 These ponies live in the mountainous regions of Burma Shan State, from which it gets its name. It is evidence of a common history and Himalayan Barmskih pony, which involves the joint origin of the two breeds. Presumably they both descended from Mongolian ponies, which have repeatedly succumbed to human influence and mixing with different breeds of horses.

Shang was no exception and has also been created on the basis of Arabian horses, which gave very few positive qualities. Arab blood is best manifested in Manipuri breed horses that have adopted good posture and fluidity of movement. However, Shang has many other advantages: easy to move on slippery mountain slopes, can carry heavy loads, tourists, children. It will take a narrow footpath, forest, small streams, all those places which do not handle any other transport. Quiet, obedient character makes it easy to deal with the animal even an inexperienced person or child. Unpretentious in feeding may nibbling even the poorest among the branches of stones; hardy, with perseverance is the target through any weather conditions.

Adults Barmskogo pony grow up to 1.3 meters at the shoulder. Colour bay, raven, red or gray in various shades. Aesthetic value almost does not bear, but copes with the robots around the house and in the mountains. Therefore, it is usually grown in rural and mountainous areas as assistants. Building a strong body with thick legs, broad neck and chest. Hooves strong, stable on the slopes.