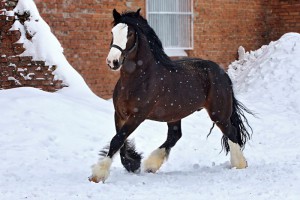 Breed Vladimir Heavy Draft horses were originally bred in the territory of the Russian Federation.

Let us consider in more detail the basic information presented horses. Breed Vladimir Heavy Draft refers to a large, heavy-duty. Average height at the withers pet becomes about 165 cm. On the creation of horses working scientists Vladimir region, as well as the Ivanovo region in which is placed Gavrilov Posad State breeding nursery. Excretion occurred via dray reproductive crossing methods of enlarged copies of peasant horses that lived in the local areas, with horses kleydesdalskoy breed Shire. Furthermore, in establishing a new generation were employed Suffolk and some other lines, but at least. The new generation of horses has been officially registered in the first half of the 20th century (about 1946).

Compared with other heavy-duty, at the Vladimir have a few features in the exterior form. Pets have a fairly dry and the relief structure of the body, much rough than that of other species. The colors of the coat there are different. The main color bay, rarely have the opportunity to look at the pet with a crow painted the coat. For animals in the head area and extremities inherent massive spots. Limbs strong enough overgrown hairs. Mane, forelock and tail section is also very fluffy and plentiful.

Total Breeding Vladimir Heavy Draft, the owners give them a positive response. Pets peaceful, quiet and obedient, as energetic and agile horse. Watching their movements, we can see light and nimble steps, and lynx. Neat and at the same time very energetic horse move beautifully and wonderfully performed any work, are particularly well suited for heavy sleds, as well as Russian troika.