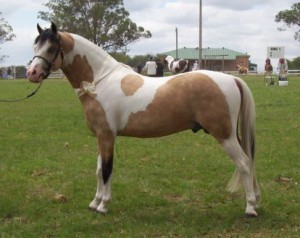 On this continent the first European settlers appeared relatively recently, and along with them, and brought the horse. In the hot Australian own representatives horses do not live, so I brought the horse quickly filled the mainland. The first inhabitants began to animals from South Africa, who have been actively imported in the late 18th century.

Early 19th century was characterized by the importation of various breeds of horses from around the world. All of them are to some extent present in the blood of Australian pony, as participated in the selection to create a new breed of pony.

Most clearly can observe features Arabic and English horses, which appear in the external construction of the body of the Australian pony. Incredibly beautiful appearance Australian pony inherited from the Welsh mountain pony. Stallion Duoll Greylayt gave a good quality seed, it happened in 1911. At present, there are about 270 thousand Australian pony and set up a special company which monitors the improvement of the breed and maintain a register.

Adult Australian pony grows to an average of 130 cm. Solid color coat color, often gray. The head of the correct form, large and intelligent eyes, pointed ears. Shoulder oblique neck with a deflection, back straight, broad chest. The limbs are short, but strong.

Step fairly wide among all members of the ponies, so they create a beautiful picture when you move the Australian pony. Champion among these participants in equestrian sports, exhibitions and various shows. Docile nature allows easily trained animals, and children play safely.