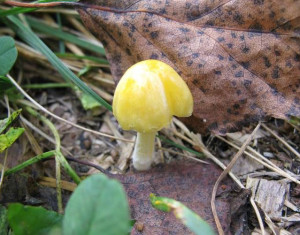 Inedible mushrooms bolbitus gold (Bolbitius vitellinus) – a strange and interesting fungus that has developed a survival plan – it is growing in a thicket of tall grass. The duration of life also makes this surprising mushroom fungus, it can fade almost in a very short time. Pay attention to the mushroom can fall, at this time other types of mushrooms across the field of view is quite rare, and mushroom bolbitus golden at this time will “loom” of his yellow hat.

In bolbitus fungus golden hat has a small size, about 3-5 cm in diameter. At first glance, it is very similar to egg yolk. At the plate mushroom and yellow. Foot fungus in a thin and at the same time – long, it can raise the bonnet to a height of 20 cm Smell and taste of the mushroom -. Not particularly noticeable. In most cases, meet inedible fungus bolbitus gold you will soon on the field than in the forest. Due to lack of taste – the fungus does not cause a lot of attention from the chefs.