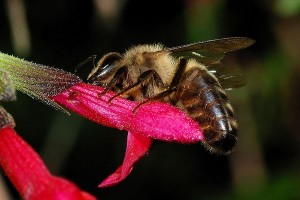 The breed is a native of Europe, as we were told the name, European bees have been exported to Africa, and later expanded to other European countries, even met beekeepers from Russia, Ukraine, where settled down perfectly.

The bees are large, resistant to low temperatures, characterized by its own malevolence and anger, which, unfortunately, is not very practical in breeding as difficult to watch and care for them. In general, the production of honey above the average, which is a positive point of the breed.