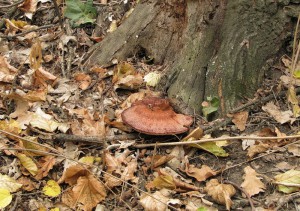 Conditionally edible mushroom beefsteak fungus, liver mushroom (Latin Fistulina hepatica.) – Tinder fungus family Fistulinovye (Fistulinaceae). The name of the fungus was because of its similarity to a fairly large animal liver. Fruit mushroom body is enormous -. 25-40 cm At the initial stage of growth of the fungus is more like an incomprehensible resin, and eventually begins to gain its form.

Favorite tree hepatic fungus are oak and chestnut trees. Best of all they grow in warm periods, of course, to meet the common hepatic fungus you can and in cold regions, only quite rarely.

Mushroom hepatica ordinary relates to conditionally edible mushrooms. In cooking it is allowed to use only young mushrooms of this species. Harvested mushrooms is forbidden!