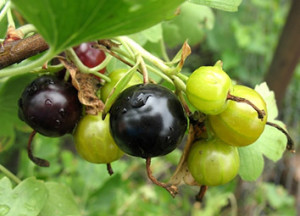 What it looks like a bush and Jost, description and photos, useful properties

Scrub Jost – a mixture of black currants and gooseberries. Crossing these two berries are the creators have taken care of so that Jost had no flaws inherent in the one and the other berry alone. They took the first grade in Germany several decades specialists worked on his creation, turning it into a berry that can deservedly take their place.

Gooseberries are very prickly plant and currants has small fruits, and collect them uncomfortable. In contrast to these plants, Jost has branches without thorns, they are not afraid of damage produced mechanically.

Black-colored, oblong, large berries, one weighs an average of 3 grams, the peel seal taste sweet at the same time reminiscent of currants and gooseberries. In Jošt berries vitamin C is several times greater than that of black currant. On one bush can harvest from 5.5 to 10 kg. He keeps up with for a week later than blackcurrants. Scrub quite hardy, it is not afraid of powdery mildew, anthracnose, and bud mite.