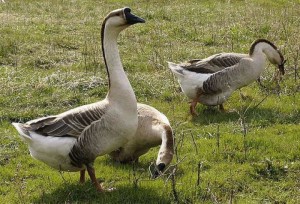 Kuban gray geese breed is relatively new, its development over the work of scientists of the Kuban Agricultural Institute. Employees of the department of poultry crossed Gorky and Chinese geese for a new breed of high-quality. With a lot of positive qualities.

There was also a second attempt to withdraw the perfect breed, but it was not successful and was as widespread as the first breeding geese. Despite the fact that the selection was made with a very good species of geese (large gray vishtines and others). Kuban geese are created in the first phase, it has been widely distributed post-Soviet space, the most active breeding geese in Ukraine, Russia, Kyrgyzstan. In the 70s of the last century, there were already more than 20 thousand, and in another ten years, more than 80 thousand. Nowadays there are more than 285-thousand Kuban geese.

The breed belongs to the middle-heavy type, but the body has a dense, strong. Head disproportionate with orange bumps at the base of the beak. Chest arched forward, the neck is short with a bend. The limbs are short and dark. A characteristic feature is the presence of a dark band from the back to the top – belt.

The breed is medium ripening. In mature Gusakov weight reaches 5.5 kg, and geese – a maximum of 5 kg. At the age of 8-9 months goslings are ready for mating and egg-laying. In this age of the goose for the first time begin to lay eggs, their number per year, about 85 pieces. This is a pretty good performance, which are considered among the best. Eggs oval shell is white, egg weight range from 140 to 160 g egg fertilization takes about 80%, from which about 80% hatch geese, and only 85% of them survive. By the 2nd month goslings grow significantly, growing stronger and gaining in weight (2-month goose weighs about 3.5 kg).

Another undoubted advantage is the high level of adaptation to the severe weather conditions. In an environment where constant wind and cold can not survive, all living beings, and Kuban geese feel in such circumstances perfectly.

The only drawback is the relatively low weight and appearance, which becomes gray shade of color of the feathers.