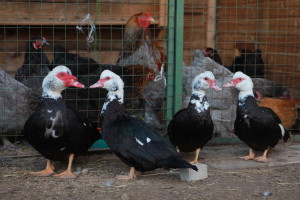 Photos and description of breed musk ducks, characterization and breeding

Very old American breed, which can still be found in the wilds of South America and Mexico. Another very popular name of this breed of ducks – Indoutki. This unusual name is not associated with the terrain and with a special feature, which is essential turkeys – the formation of a skin of red color around the beak and eyes. Only because of this similarity musk called indoutkami. There are no other common features, to somehow tie ducks turkeys. Ducks actively domesticated local residents, and later they began to export and beyond the continent.

We have all heard about the distant and mysterious tribe, whose inhabitants were very well developed and flourished in his time – the Aztecs. These are Indians first domesticated ducks began to feed for meat and eggs. Domesticated Muscovy duck a few hundred years has lived only in the Aztec and local tribes, some time passed before it learned about the world. With the advent of the colonialists in America, everything changed. Europeans began to take out all the richness of the local people in their own country and the colonies. Together with the other looted valuables, Muscovy duck came to Africa. Some time later, spread to virtually all continents. In the post-Soviet space ducks were in the early 80-ies of the last century in Germany and France.

If the name indoutok else can understand, whence came the name of Muscovy duck is a discussion. The first version says that the name comes from the ability of ducks excrete a substance that has a musky smell. According to the second hypothesis, the name given to the ducks still do the Aztecs, which might sound like – muiska. The third version is also in the fact that the name is derived from the name of the ship on which the ducks were brought to Europe. And it belonged to the Moscow company, so in many countries and called rock like Muscovy Duck.

Ducks belong to the species of wood (Cairina moschata), have a fairly large size and peculiar appearance. Tempering in the wild, where the principle applies: survival of the fittest, Muscovy duck has a strong immunity, resists disease and small pests. Character favorable for growing at home: calm, quiet. Ducks are well adapted for almost any terrain. Perfect to go without water body, actively graze outdoors. 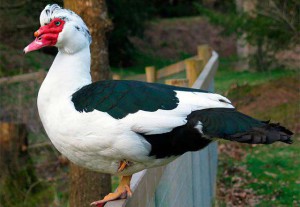 In addition, all meat indoutok not only delicious, but also useful, because it does not have much fat in its composition. This positive effect on the price and quality of the meat.

For musk duck needs a little personal space, but big and noisy companies they do not like, so it is best to separate them from the other birds. Birds are gaining good weight and have a decent size, so mature drake can have about 6 kg, and most duck reaches 4 kg. Indoutki have good performance of eggs – about 100 pieces, weighing 75 g per year. Compared to some species of ducks, that’s the average.

The only thing that distinguishes the musk duck eggs on the other – is the shelf life. They can be stored for a long time, because of which increases the number of eggs for laying and further ensures that the number of ducks will be slightly larger than that of other breeds. Indoutki very good hen, but if it happens that the duck is not going to hatch or, for example, a lot of eggs, they can sit through any other poultry. Conversely, Muscovy duck can not incubate their eggs: chicken, turkey and others.

Eggs have a very pleasant taste and beautiful appearance: pure white protein and a large yolk. Confectioners like them to add different goodies.

Another undoubted advantage is the lack of noise from the musk ducks. They shout and if, it looks like a whisper. This is especially true after the Beijing Ducks, which are a little nervous, and because of this, make loud noises.

Musk duck hasty and heavy. The muscular system is well developed and covers about 40% of the total body weight. The amount of fat quite small, even in the winter musk ducks lay almost 2 times less fat than Beijing. The most valuable and tasty meat parts obtained approximately 1 kg. The price of meat indoutok slightly higher because of the specific taste, which resembles a game. The greatest number of musk ducks grown in France, that’s where they are kept for their meat and eggs. Another name that has come up for the French themselves indoutki – Barbariyskaya duck.