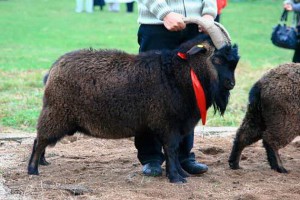 Altai Mountain goats breed created in the period of the USSR, on the territory of the Republic of Altai. Specialists worked for 40 years to bring a good productive breed development were conducted from 1944 to 1982. The basis of the local Altai took the goat, productive or special external features it is no different, so it was decided to cross to the Don, who had plenty of productivity. First heirs are not qualitatively different productive capacity, but the next lambing were much better. Therefore, the second and third generations of goats have begun to breed in itself, selecting only the best representatives. Thus turned Mountain Altai downy breed that treat downy type, but is also used as meat production. Milk goats give quite a bit. Their downy properties Mountain Altai breed took over from the Don ancestors.

The breed belongs to the middle-heavy type, so Mountain Altai goats are low and do not differ much weight. Adult goat reaches a maximum of 70 cm, and goats, and even less -. 50-60 cm body compact, dense, rounded. Bones strong, but lightweight. Muscular system developed is not bad. Limbs of medium length, covered with thin wool, which is much shorter coat that reside elsewhere. The body is not too large, the length of which is 65 cm large and broad chest. Hooves strong, dark colors with reflection. Problems with the disease feet hardly occurs even do not have to clean and trim the hooves, unlike other breeds of goats.

Coat color is of two types: black or white, mottled or mixed colors should be. Mountain Altai is black goats are the most common. Wool is a small percentage, a huge part of the down – about 75 cm It is for such a large number of farmers down and appreciate the Altai mountain goats breed.. Not only that, a lot of fluff, so it is also of excellent quality: pleasant to the touch, durable, long and very soft. Pooh Altai Mountain goats in the purchase large quantities of the enterprise for the production of down products that are highly sought after and are in demand. Employees of one of the famous factories respond positively just about fluff Altai Mountain goats, as the most high-quality material to create different things.

Altai Mountain goats are medium-heavy type, so it is natural that the most mature goats up to 70 kg (with intensive feeding – up to 90 kg) and goats up to 40 kg (with intensive feeding – 60 kg). The breed is not very early maturity at the age of 1 year calves weight vary from 30 to 40 kg. Altai Mountain goat at a lambing usually brings a kid, but there are births and twins.

Altai Mountain goat not apply to dairy, but still milk they produce only very small amounts – per day can receive up to 0.5 kg of milk for the year is about 100 kg. Meat performance is much better than milk from goats obtained 50% of beef output, from which 75% – the meat. Another well-developed area – a bouffant down. With adults Gorno Altai breed goats can produce up to 700 grams of fluff excellent quality. Even the skin of goats goes on further processing of its produce all sorts of things.

Breeders are still working to improve the breed and crossbreeding it with other goats to improve the meat quality of down. Now experts are developing two main areas within the breed: alpine and mountain goats Stop Altai, which also gives you a large number of high-quality fluff.

Altai Mountain goats can be kept almost anywhere in the world, because they are very adaptable to all weather conditions and is not afraid of problems with the lack of greenery. Such immunity goats purchased through tough mountain conditions, they raised a endurance and unpretentiousness. Altai Mountain goats can pass long distances and confidently walk on the mountain slopes in search of suitable food.

The only drawback, which is not so often seen, are the antlers, which in adulthood interbreed with each other. But this lack quite insignificant and concerns more exterior than the productive qualities.