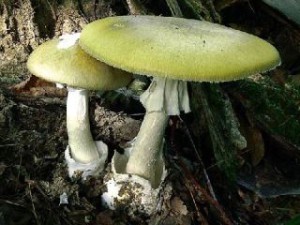 The description and photo of fatal and non-edible mushrooms

The most poisonous mushrooms in our forests is rightly considered a pale toadstool (belongs to the family amanitaceae, fly agaric genus), because of the high concentration of it a substance such as phalloidin, any heat treatment will not make it more edible: 9 out of 10 poisoning It ends in death. Ardent pickers always recognize this kind, but still need to know with some edible mushrooms can be mistaken for it, in order to protect themselves.

Young mushrooms in their form resemble egg. During ripening cap rectified and the film covering the entire surface is ragged ring on the stem. The diameter of the mushroom cap to 15 cm, it is very dense in the center of the color of the cap dark green, olive, brighter on the edges, at least – quite white. Sometimes you can find mushroom wrapped with the top edges of the cap. Above ground on a stalk of the fungus is Volvo – white or greenish sac shape. On the white leg fungus visible green veins, to the bottom of it expands. The length of the legs -. up to 20 cm, while its thickness is only 2 cm Do not have a pronounced odor and does not change color when pressed.

Most often pale grebe inhabits deciduous or mixed forests. This fungus loves moisture, so after the rains they littered the neighborhood, especially in the period from late August to mid-September. 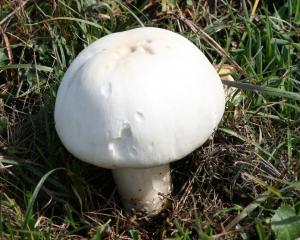 Unfortunately, pale toadstool is very often confused with edible mushrooms. For example, in the poisonous mushroom like this as a kind of edible russula green. You can distinguish them by their lack of edible fungus ring on the stem. Also, russula no Volvo at the very base of the fungus, and on the leg you will not see green veins and streaks. From pale toadstool mushroom Greenfinches feature on plates: at Greenfinch, they always have a yellow color, and in our beauty – only white. Very much like it and liked mushroom behold only pale toadstool records are always bright, they have a mature mushroom darker. In mushrooms, like russula, no Volvo. A lot of similarities with mushroom float, so it’s best not to risk it.

To ensure each mushroom that you put in the basket, do not collect separately growing, as distinguished young mortal kind of mushroom is difficult.

Lethal period in case of poisoning, first aid, the duration of

Now we describe all the symptoms. If poisoning pale toadstool poor health does not appear immediately. After penetration into the body poison pale toadstool takes effect on average after 10 hours and for the death of only 30 mg is sufficient. Initially, headaches, deteriorating eyesight, a man becomes inadequate, experiencing hallucinations, because the poison affects the nervous system. Next – cramps, vomiting and diarrhea that leads to dehydration. Sometimes the sense of time feeling better, but the destructive processes in the body is already inevitable, because the toxins have been put in the blood poison affects vital organs.

Usually, death occurs within ten days after the poisoning, but immediate treatment in a medical facility immediately after ingestion pale toadstool increases the possibility of man’s salvation. If assistance was provided in a timely manner, then the body’s recovery process after poison pale toadstool can last up to six months.

One thought on “Mushroom death cup”