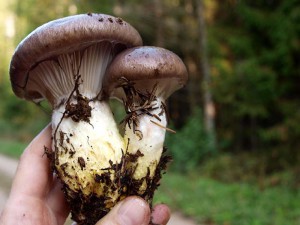 In pine mushroom mokruha beautiful hat light brown with a little yellow tint. At the touch of a hat a little slimy. In it reaches a diameter of 15 cm. The plates are the same color as the hat.

Favorite place mokruhu – coniferous forest. Here, this fungus you will meet, as a rule, from the beginning of July – the middle of October.

Mushroom pine mokruha relates to conditionally edible mushrooms. It can be used only after boiling, frying or drying, however, is to draw your attention to the fact that mokruha is of little value.