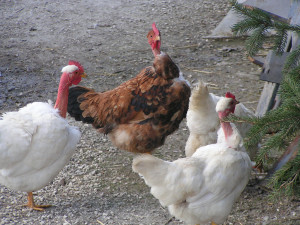 Chickens a breed highly prevalent worldwide and are among the best for their meat and egg performance. Already in mid-year, as many other species, age, the birds start their performance of the egg, with the average number of 160 eggs is higher than when the mass of one egg about 60g with cream-brown shell. Naked neck bred breed multiply both specialized and non-specialized poultry farms, because they feel good enough economic birds. They are very convenient because they are unpretentious to the feed, do not need the special needs and develop rapidly, which is a guarantee of income offerings.

Since the breed is considered meat and egg, birds profit share into two categories. As meat production has a high quality product for the taste data is different from the usual meat, if only meatless properties. Live weight of mature chicken – 2.5 kg, males – 3.5 kg, with proven safety in adult birds – 94% of young – 95%. They called naked neck so not simple. They have a very interesting and original appearance. Even the smallest newborn chicks swept bedrock criterion – naked neck. On the neck, bottom, and side parts of the underwing birds no special adaptation to there grew feathers, or at least a little fluff. The older the chicken is done – the more on the bare areas of the body covered with visible wrinkles, roughness and redness that with age is also becoming more prominent. Such a phenomenon scientists call Apter (areas where there are no special follicles that trigger the growth of feathers or of down). In comparison with other breeds such genetic variety of looks unusual, such a feature is laid in the basis of embryonic germ that stops the formation of fuzz growth. Naked neck and dominates the birds, so the offspring born consistently the same characteristics (as opposed to those that are crossed with ordinary). Not part of the feathered birds are indicators of the breed. This standard naked neck chickens – the minimum number plumage. These chicken are very shy and are distinguished by their excessive activity and endurance. Often the breed made breeding in the southern regions. Previously, rock had a different name – Transylvanian. In these areas a variety exported from Hungary and Romania. Birds listed as genetic reserves.

For their external data in birds dense fleshy torso, rounded belly, muscular, with a big broad shoulders and convex deep chest, body. In birds, strong legs low orange. Enough wide head is medium in size with red (sometimes white) earlobes and eyes, yellow beak and a small leaf-shaped crest erect. In large naked neck, not tight on to the body of krill, little drops to the ground, and a small tail. Birds are not allocated a special assembly. Feathers are covered only some parts: the head and part of the occipital, cervical compartment below the front bending growing a small amount of feathers, similar to the form of a small “bow”. This type has a variety of colors: brown, dark gray, mottled, Colombian, kukushechnye etc. In the moulting period in naked neck birds completely changes the surface layers of the skin.