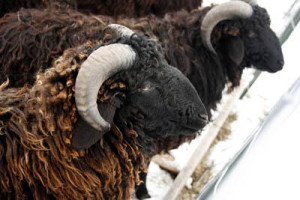 How to milk the sheep, tips and step by step instructions

Number of sheep milk production depends on many factors, such as the animal breed, feeding conditions, care, duration of isolation in female milk. Average milk yield per day in thinwool and half-thinwool females ranges from 1 to 1.5 kg. Level milking females with multiple children 20-25% higher than the one that has one. Females who kill lambs, milk immediately, should be carried out twice a day, for a period of 60 – 90 days. Female, nursing children, milked, killing young lambs during 30 – 50 days, initially twice, and then only once a day. There are times that of females milked when lambs reached a half months. Lambs weaned every evening from the female and withdrawn for the night in a separate place. On the morning of female milk, then bring a lamb, so be extra feed such lambs.

More profitable and efficient milking females assumed in the stable, because the milk get quality in a short period of time. Place milking built using four fences made of wood, three fastened firmly, and the fourth will serve as a door and is mounted on hinges. Flooring should not lie flat, you need to build it in such a way that the animal, who is there, the front legs were higher rear.

Milking is divided into several parts, the person producing milking sitting on a chair near the far end of the bullpen. In the initial stage of milking the left hand hold the udder, holding the back of the tail, right hand meanwhile milking nipples, thumb clamped in the palm of your hand, and press down the other nipple in turn, hand spend on it. This manipulation will help remove the blockage that was created during the last milk milking.

For quality milk you need to adhere to these strict rules, first of all, before milking carefully wash their hands, and secondly, the teats and udder of the animal wipe with a damp towel, in the third, milked milk carefully washed dishes, covered with a cheesecloth into a pair of layers, fourth is pouring milk yield, it is filtered using cheesecloth, folded in several parts.