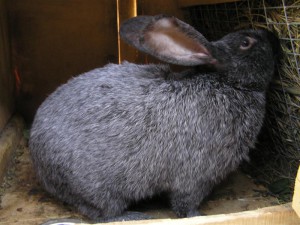 Rabbits breed Poltava silver giant big enough animal skin evenly colored on all parts, with the exception of the tip of the muzzle, ears, paws and tail top color also slightly darker than the body. All the rest of dark color, except the base of the same tone and guard hairs of the second half of their white, bluish bloom, slightly lighten the roots. Rabbits in the silver age of the month, and at birth have a black color, full color is created to four months.

The breed rabbits established in Ukraine in Poltava at the farm “Tula” and “Peter”, having the technology pure breeding species champagne, had been brought into the country in 1927 – 1928 years. Removing litter of rabbits was established to improve the weight, reproductive, high quality meat and the adaptation to local climate characteristics.

Rabbits Poltava silver, advantages and disadvantages: a rigorous selection and selection of individuals have borne fruit, and turned to create a large number of animals with good quality meat, thick hair that was significantly different from the imported rabbits champagne, they served as the basis for further breeding silver rabbits, as an independent and official breed they began in 1952. Characterized by massive case, the correct form, the average size of the head, the ears are small, dense body, the average length of 57 cm, 36 cm of the chest, back straight, powerful legs. Rabbits in adults weigh from 4.5 to 6.6 kg newborn rabbits have a weight of 75 g, are growing rapidly. Rabbits meat quality can be judged by the number of rabbits elucidated for slaughter age 3 – 4 months, it is about 61%. Carcass inventory looks fat even layer is placed, the meat juicy and tasty.

Rabbit milk, fertility, for the period kindling bring an average of 8 rabbits. Rabbits are not very common. By the ability to rapid addiction to any climate silvery rabbits are second only to the Soviet chinchilla, Vienna blue. In a qualitative diet normally tolerate the cold season.