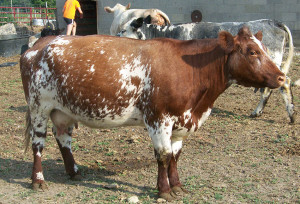 Shorthorn breed cows to treat the type of meat. The breed was created by reducing the number of British beef breeds, so that in the 18th century showed up a new Shorthorn cow. In the following stages of selection experts have already begun to withdraw Shorthorn breed cows that are not only meat, but also give a good yield. Cow with good quality meat and milk quickly became popular not only in Western Europe, but also in other parts of the world.

Farmers from all over the world have begun to actively buy Shorthorn cows. In the former Soviet Union for a long time they did not appear only in the last century they began to be imported from Europe. Breed quickly began to spread throughout all the provinces of the country, the main foci of growing Shorthorn cows were present the Rostov, Volgograd and Voronezh regions, as well as on the territory of Bashkortostan. The breed is not diluted, kept her, so she gave a good profit and distributed to all post-Soviet countries, and today more than 165,000 accrued Shorthorn cows.

This breed has gained popularity thanks to its taste of meat and its quantity. With proper care and well-fed, Shorthorn breed specimens rapidly gaining your weight and height. Calves just a day increased the weight of 1-2 kg and are actively growing to 3 years. To achieve such significant results, it is necessary to allocate a lot of attention and monitor the diet of the animal.

Shorthorn breed apply to the type of meat, so it is most developed muscle system. A large, round body, wide chest and pelvis, a short but massive neck, his high forehead. Abdomen and chest sagging, dice small, but strong. The limbs are short, massive. The coat is short, brown-red color with white spots; dense and delicate skin; udder underdeveloped. Through the wool is well visible all the muscles, and for which valued the breed. Beef Shorthorn breeds from very gentle, pleasant taste, without much fat; thin fibers in the meat. With the cow comes out to about 70% of meat products – and this is only with juveniles.

This is a great meat breed cows gives a fairly good income, not only enough milk products. In order to connect these two qualities in one breed, they began to cross with other dairy breeds. Thus were born Kurgan cow meat and milk type. Now the cow could give not only high-quality meat products, but also a good yield. For the year so the cow can give 2,000 kg of milk to a record 6,000 kg, fat content up to 4%.

The average weight of Shorthorn cows is 600 kg and bulls – up to 1 ton. Experts at the hour working on increasing weight in the Shorthorn breed and improve milk production in Kurgan.