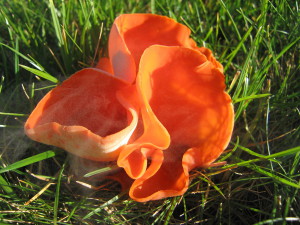 Inedible mushroom orange silt (Latin Aleuria aurantia.) – The fungus ascomycete order pezizales department. This fungus is a strange form, perhaps the most beautiful mushroom with a very colorful appearance. Mushroom pickers will definitely not pass by the fungus silt. I hasten to note, many people refer to the orange mushroom silt inedible mushrooms, however, we believe – mushroom conditionally edible and can be used in cooking in small amounts. As a rule, most cooks use this fungus in not cooked as decorations for salads.

Mushroom cap is very similar to a small dish with a diameter of 5 cm. Often, you can even meet a few hats that are fused together with the adjacent mushrooms of this species.

In most cases, find an orange mushroom silt you can in latitudes with cool climate. The best time to look is the beginning of July – end of August.