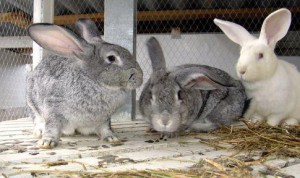 Tips for single kindling, the use of single females, the description and photo

To quickly increase the herd of rabbits, is often used young rabbits at the age of 4 – 5 months, and this year obtained the completion of offspring. Active use of these rabbits is considered a key element for the further killing of young animals with their meat and produce skins. For one-time use kindling the females, who were born in the winter, February rabbit give kindling in July or August, and were born in December and January, two – the first in June, following in August.

Summer rabbits are grown in the green, grass, blowing them to the slaughter of 4 – 4.5 months receive dietary, good quality tender meat, and winter high quality skins. Breeders kindling this method referred to as cost-effective in breeding animals, even if each rabbit needs a separate cell. To make a one-time kindling selected the most healthy, well-formed and rabbits. Born near the female rabbits kept 40 – 45 days.

The selection of the females carried out at the age of two months, and pay attention not only on the physical development of the rabbit, but also as rabbit, bringing up their milk. The females selected for single kindling is placed in a single cell, the maximum it is 5 – 6 rabbits. With three months until each mating a female plant in a separate cage. And in 4 – 5 months, when the rabbits reach puberty, they mated.

Females who have given birth are placed in a common cell or start up on the meat. Therefore, they are called single females.