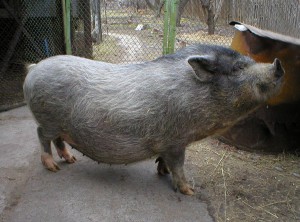 By the standards of efficiency, representatives of Murom pig breeds are universal or meat and greasy direction. It was created by a variety of complex reproductive crossing. In the process involved several different animal swine areas, which include: Lithuanian White, Large White pigs and other various local species. Engaged output Murom newly-breed breeders, scientists at the Vladimir region territories. Some time after the appearance (approximately 1957) Murom representatives gave a separate title and confirmed as a separate species. Previously Murom bred pigs in certain areas, and that has not changed after a while. The highest probability of finding a farm to breed represented – Vladimir region. One reason for breeding your pet is in the region is the presence of zonal Nonchernozem, with good development of the potato. On the plus varieties include the fact that the animals are well adapted for walking the pastures. Externally Murom pets have sufficiently strong constitution, and of the founders of a kind – the breed of large white pigs, animals inherited level of productivity and quality. Further studies species were aimed at improving certain qualities. Especially to improve the quality of the meat product of young representatives of Murom, increase of milk of female representatives (sows), to maximize the multiple pregnancy and finally eliminate congenital defect – foot curvature.

Consider the exterior characteristics of the breed represented. So, pupils have a strong, proportionate body; Figured pets strong and harmonious; head light enough to form curved profile; at the head of the neatly placed big ears, because of its large size hanging heavily over his eyes, and often interfere; thorax pets convex and wide; dorsal part quite straight, large and relief; at the end of Murom not particularly long, strong, and perfectly placed; well developed debarking area. Externally pets distinguished white coloring and abundantly covered with a soft body and a sufficiently long bristles.

Murom is a productive variety of quality is not one of the best, if you compare them with other breeds, but agree that the initial product of the animals was a real furor for manufacturers. Statistical data show fertility of that one sow can bring litter of ten to twelve piglets. The level of milk yield is about 55-80 kg. Toddler Development of up to six months have shown good results in a set of live weight, about 6-8 months, babies weigh 80-110 kg. The adult female has a representative of the live weight of about 190-210 kg, and the representative of the mature masculine – 260-290 kg. The required amount of feed units per kilogram of body weight becomes 3.5 to 5.0. Under the conditions of animals in meat fattening system out high quality product bacon and high carcass yield.

The main mandatory requirements in the content provided by a variety of well-formed diet. In practice, it is proved that the best products for a full feeding a large amount of potatoes, various concentrates, skimmed or clover hay. Pet feature is that they are well adapted for grazing where they behave calmly and walk easily transferred.

Muromskaya breed has multiple predominance. It is known that a great slaughter pigs at the output conditions in the meat feeding. In the final results obtained high quality bacon. Pets feel great in open areas that also characterizes their peaceful stay in the pastures. Especially intensively for breeding provided varieties come from breeders from Moscow and Vladimir regions. Unfortunately, in other regions of the species is unknown.