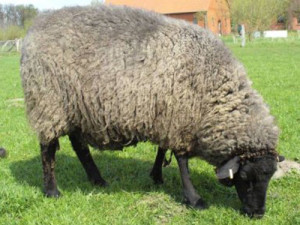 Description of species for domestic breeding, together with the characteristics, photos

Coarse wool sheep breed with a fairly long history that can be traced back thousands of years before our era. Another long-time residents of Pomerania grown sheep in the conditions of cold fronts that come with constantly cold seas. Rain, snow, cold winds and severe frosts hardened Pomeranian sheep and formed a good immunity to various diseases.

Many centuries ago the breed Pomeranian coarse-wooled sheep, has been popular in Europe. Even 3000 years ago, there was this breed and have called on the island of Rygen. Not one millennium Pomeranian sheep living in these areas, while in the 20th century, little would have ceased to exist. When the animals left near 100 they began to revive, and marked the beginning of new lines Pomeranian sheep.

Pomeranian sheep grow to an average of 55 – 65 kg and densely covered with coarse hair, which protects them from adverse weather conditions. Coat color is black or white, red and brown shades of dark and light. Leather black, so in places where there is no fur – on the head and legs, has a dark color. Hornless breed, but sometimes some individuals can age to acquire small horns.

The most common of the sheep get wool yarn and felt for making warm clothes. The coat is quite rough, so mainly used for the manufacture of jackets, shoes, blankets and carpets. The meat is of particular value only in young lambs, it has a delicate taste and expensive to be appreciated.