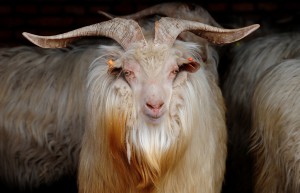 Photos, description of the Kashmir goat breed, characteristic for home maintenance and breeding

The breed cashmere goats is widespread in mountainous areas of Asia and a small part of India. Kashmir goats are one of the most adapted to life in the mountains, they easily carry all conditions, even at an altitude of 5000 meters. Temperature fluctuations in the cold and warm weather can range from +40 to -40 degrees in Celsius, while the productive qualities of the Kashmir goats remain high. Such good thermal insulation of Kashmir goats down and delivers warm thick coat, so they almost do not feel the cold. Do not feel uncomfortable, and these animals at extremely high temperatures. The most expensive prized wool cashmere goats, but they are also grown for the purpose of production of meat and milk.

Kashmir goat – this is a relatively small species, which differs refinement and beautiful exterior. withers in adult animals reach only 60 cm, total body length is about 1.5 m. The majority of the external features are similar with the breed Angora goats, but they are a little more Kashmiri. head of medium size with a beautiful, curved profile that resembles an eagle’s beak. due to the fact that the ears are quite large, they hang from the bottom. Most individuals of this species have small horns, the shape of which resembles a ram. Wool is thick, but evenly covers the body color of the light. Muzzle Kashmiri goats hardly covered with hair or she quite short, but pleasant to the touch. The body is covered with a fairly thick and long hair, the purpose of which – to protect against hypothermia. the most valuable thing you can get from the sheep – this is fluff. under a thick ball of thick and heavy coat to be down, which is very highly thought of among the down products manufacturers. the most expensive is considered to be snow-white fluff that there is only a small part of the cashmere goat, in others it gray with a darker or lighter.

From down cashmere goats produce only high quality products, which is highly appreciated in the consumer market. however, still believed that the down brings the greatest part of the income. Cashmere produce a very gentle and pleasant to the touch fabric, which are then often used for bedding.

Despite the development of various technologies that can artificially recreate virtually any natural material, fluff cashmere goats did not begin to retreat into the past, but on the contrary, a good indicator of the status and quality. it is also due to the fact that the level of the world’s population has risen significantly in comparison with the past century, and now a lot more people can afford to buy high-quality natural thing.

Wool Kashmir goats can reach 13 cm in length, and downy volosiny have from 3 to 9 cm in length, but it is so twisted hundred seemingly shows much less. Length, as well as lightness and thermal insulation properties of down pushed the Kashmir goat, a leader of sales of this product. Things are bought up rather quickly, are long and warm in any cold.

In ancient times, people collected fluff cashmere goats, which they left on the ground, the trees, the bushes, but then carefully selected from his thick fur and woven in winter warm clothes. nowadays most valuable fluff vychёsyvayut after the haircut, but it also has one negative feature – gets a lot of wool, which is not suitable for further processing, so all her must-away. This process is usually carried out by hand, so it may take a little time. In general, the year can be obtained about 120 g of pure fluff.

The greatest number of cashmere goats grow the indigenous inhabitants of India, where they are and how many years ago, the goats graze near their homes, used in food milk and meat, wool and hand over money. the largest number of cashmere products can be seen in Srinagar (Kashmir) and London, which exported raw materials and finished down things. Thanks to a well-known and popular products Kashmirovye goats received another name – Shalev. All the matter is that some time before, and even now, many women considered necessary in the wardrobe have a cashmere shawl. This part of the wardrobe painted with beautiful patterns, brightly colored, very light and extremely warm. the first time such a thing began to make even in ancient times, later, in the 16th century, cashmere shawl was considered very expensive, so it is worn only great ladies.