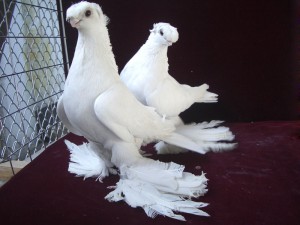 This breed of pigeons Uzbek Tumblers mainly differs own flight qualities, and she kind of is divided into two distinct subgroups.

The first group is characterized by the fact that the birds have retained the highest level of flight performance, which is why it is inherent to fly fairly large time intervals, while the pigeons do not just fly, and play on the height and perform various tricks. You can often hear such as pigeons say “poygar”, which stands for playing.

There is also a subgroup of another type, which is almost similar to the first, and a lot of what is different. First of all, these birds do not have a similar level flight, although they have had the opportunity to fly as aggressively in the heavenly expanse. The reason for it became too numerous studies pigeon-lovers, because they’re too carried away with the improvement of exterior qualities of pigeons. Later another type variety is fully accustomed to the aviary content, there is feathered not resolved any departures, and their existence is constantly trying to change, adding all sorts of cross-breeding with other breeds. Currently, there are quite a lot of different varieties, and their name in the main corresponds to the colors of feathers, or some features in appearance.

Between the existence of many species, Uzbek lohmonogie pigeons (the bird is called in the local areas of their original appearance) are distinguished by the presence of different subgroups that have been achieved as a result of intra-breed breeding. Although this breed and has a lot of types, including the most distinguished: avlaki, gulsar, gulbadam, kara-portation, kara-novatty, mallya, novatty, kukcha, puyany, tasman, sochi, Udy, chinny, hakkya, chelkary, shiphodzzy, as well as some less well-known groups of pigeons. Virtually all species of birds represented initially displayed with only one coloring of the plumage, but, after moulting process birds get another color feathers, as well as some interesting patterns that make them more unusual. Parts of all, to identify a particular breed of Uzbek Tumblers can use their external indicators. Studies have shown that for the time of breeding birds, particularly stood out a subgroup of the number of pigeons – Udy forelocks’, whose characteristics we shall now consider.

So pigeons breed Uda forelocks’ inherent in such exterior features: a powerful body with compact dimensions; average head sizes; small straight forehead; beak parts of all shades of cream, short enough; well defined neat forelock that is beautiful is deployed in the form of a flower on the front and a small tuft on the occipital region, which pass into the mane; legs short, quite abundantly covered with feathers that reaches 9-17 cm in length, and are also found as the title of “hawk feathers”; strongly developed beard, without the presence of any gaps, often resemble the shape of an inverted small plates, the more this characteristic is very valuable and determines the level of the cost of a dove (the more locks – the greater value). Externally birds differ interesting dull bluish coloring and bluish tints, the chest is often silvery shades, and have dark wings dark zones.