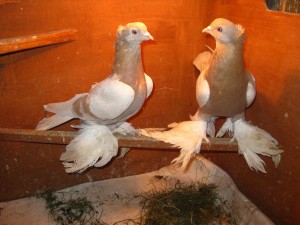 For representatives of the breed pigeons agaran inherent dwell on Turkmen territory. The main species name also sounds in the Turkmen language, and means “the cream of camel milk,” if more deal in the title, it is an expression meaning the best of the camel. Incidentally, this is one of the species that belongs to the Tumblers. Dove may incite the body and thus makes a few turns on its axis respectively, usually vertical direction. It’s been quite a few years, both the Iranian mountain regions, or rather the central region of Iran and some areas of western Afghanistan. Introduced a variety of uses relatively high popularity among fanciers, the main reasons for this popularity is the excellent quality of flight and combat. It is known that pigeons breed agaran not fly more than three or four hours, but to compare them with other birds, having high flight characteristics, it is enough. Especially watch such virtuosos air is always very interesting.

Consider the exterior characteristics of the variety. Thus, it is known that pigeons have such external data: slightly rounded, massive head part on which there is absolutely no application (eg, jewelery); Eye color is often closer to the gray shades, there are also dull yellow or bright orange color; beak rather short length and not sharp (often in female representatives of the beak is slightly thinner than that of men); middle cere sizes; fairly long, straight neck; chest large and convex; medium length, massive and streamlined body; great wings, long so much that is easy to relate to the end of the tail section; the tail is made up of 10-13 steering feathers; lower legs, heavily feathered and feathers length waver from five to twelve. Externally, the breed is distinguished unusual colors feathers. The area of ​​the chest and neck area are painted with yellow various palettes, which often overlap with orange. The head and torso of the pigeons more ash or silver shades. On the wing flaps is clearly expressed in white or yellowish (very pale) color, with bright yellow belts. The flight feathers wings are painted in white or light yellow color shades. All leg feathers have white-palettes. In our time, become more and more common representatives agaran having light brown body, except that the tail area of ​​the drawing and the beak of the same classic colorings. One of the newest, besides a little popularity, are considered blue-gray feathers doves.

Introduced species of pigeons agaran has a special value. According to breeders, only minus the pigeons is considered the minimum level of population. But in spite of this drawback, the birds fly well and long, and in the air performing various stunts, for which interesting to watch. Such interesting predominance and to the same original appearance of birds have won the recognition of the multitude of fanciers who bred them with pleasure in their territories.