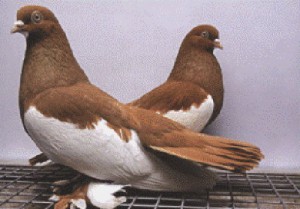 Presented Kamyshinsk breed of pigeons has the status of one of the most ancient breeds. A known fact is that the original purpose of breeding – for racing purposes. In the interval between the 19th and 20th centuries, this breed began to breed many fanciers who admired all the benefits of a fully Kamyshinsk. The peculiarity of Russian was interesting hobby that many have not been assessed and considered a little odd chase pigeons. Strictly speaking, it is for reasons induced and created a similar kind of funny and unusual, although pigeons and has a high flight characteristics, they are perfectly suited to the persecution.

Own title reeds representatives received after the place where they were bred. On the territory of the Lower Volga region, near the city of Kamyshin has its first representative of this species. About what it means to the present set up of pigeons is unknown, and all sorts of facts that mention it are considered extinct. In general, we consider one of the rather mysterious breeds of pigeons.

For Kamishinskaya dove standard have deep black plumage almost the entire body, except for the white wings, and sometimes there are representatives with a white abdomen. Rushes quite large, their length can reach 35 to 40 cm. This species also varies in different subspecies, for example, in addition to standard of pigeons that have a typical coloring, also there are other character types, whose plumage main color is blue, silver, red or brown shades. But at the same time, there are also similar quality appearance – white areas are required. Diversity focus pigeons are called within-breed and also have other names. There Astrakhan (sometimes called czars), Dubovskoy doves vysokoletnye and kondratskie intra-breed types. Previously, only the birds were considered separate groups Kamyshevskiy, but over time the distribution of such pigeons, as well as any external factors that affected the species led to the creation of new species. For this reason, at the moment all the subgroups have their own standards, although we all know that they were originally Kamyshinskaya.

Consider the exterior characteristics of the species represented. Thus, inherent in pigeons: a powerful and solid constitution; birds have the body fit and relief; reckons the tail portion 15 to 23 of tail feathers and the tail itself is high as compared with the case; wings long enough and powerful; head of the medium-sized, slightly rounded; beak a little longer than usual; eyes are pale yellow; eyelids are small and a bit dull shades.

Representatives Kamyshinsk pigeons thanks to a strong constitution, possess extraordinary stability. For example, regardless of the weather conditions, the pigeons can easily rise to great heights. Birds are well developed gregarious instinct, they always stick together and overfly the territory around. Often, when on the way there are various bad weather and pigeons can get lost in space, after some time Kamyshinskye easily find your house. The breed is very hardy does, regardless of the situation, they will be able to survive in extreme conditions, and even after a hard day quickly restore their own strength and overcome fatigue. In the world, it is difficult to find a similar breed, whose representatives are also able to quietly and steadily used to cope with difficult living conditions, at the same time would remain fragile and beautiful creatures.