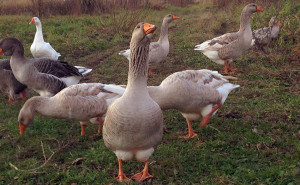 Clay Goose for the first time in Russia launched in the Vladimir region. To get a new breed of high-quality, it was decided to cross Kholmogorsky and Toulouse goose. A new breed of geese on the poultry farm “Pioneer” had a characteristic “clay” color, thanks to him, the breed acquired its name – Clay Vladimirskie geese. At the crossing, there were also birds and other plumage coloration, but they are fun and less were less hardy, so for further selection took only clay geese. They have the best characteristics for the production of eggs and meat, the experts have also worked to improve the number of fertilized eggs. All developments were successful, and a new breed with good quality has been bred. Despite its characteristics, Vladimir Clay geese grown quite small amounts due to the difficult political situation in the country at the end of the 20th century. But today, a little breed is gaining popularity and has many farms and factories can be seen that a good breed.

Consider all the advantages of a closer and rock faults. First, the most important argument to make yourself Vladimirsky The clay geese is their ability to gain weight quickly, they are considered heavyweights in its category. The dimensions of the body, though the average size, but it is fairly dense, slightly elongated. It catches the eye as unusual color of feathers: gray with a hint of green, which is called clay. Among other features of Vladimir The clay geese are proportions of the body: a small head, thick, medium length neck. At the bottom of the abdomen hangs two folds of fat.

Adult Vladimir Clay goose can reach up to 9 kg, while when goose – 7 kg. Goslings became strong in the 2nd month can already weigh 4 kg in the presence of good pasture and grass. In adulthood, geese are not a lot of eggs, but the young ones have a fairly high rate. At the age of 1 year young goose for the year can carry 40-45 eggs. Eggs are oval, large, massive (up to 200 g). Due to poor oplodotvoritelnosti, the eggs can hatch only half of goslings, but if they have already appeared on the light, the risk that ptenchik die from illness or weakness reduced to zero.

Vladimirskie Clay geese have strong immunity, so do not get sick and to cope with other pests. Besides meat, also quite highly thought of fluff, which has a very soft and high-quality properties. For all the characteristics of this breed has overtaken common in many regions and countries Kholmogorskaya.

Despite the fact that this breed is not very common, it is of great importance for all poultry farmers, without exception. The point is that of Vladimir geese The clay is very good heredity, which plays an important role to create on their basis of new breeds. And at this time the breed geese are bred only in the region centered in the Vladimir region.