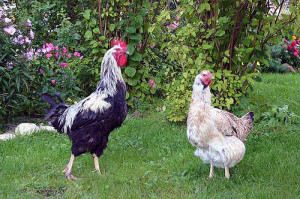 Breed chickens yurlov crower considered one of the oldest Russian rock. Conclusions of its Russian scientists poultry breeding method in Kursk, Orel and Voronezh regions, which are considered the most Black Earth region of Russia. Named in honor of the breed Yurlovo village, and the other part of the name like the features and sonorous singing males, which is a relatively nice and long. Each new generation of rock in its derivation, choose the best males in their voice, it had to be a strong voice with low tones and greatest length.

Yurlovsky vociferous hens for their productive area related to meat and egg line. The average annual egg production is about 150-160 eggs with cream-colored shell. For its meat traits live weight of adult chicken is about 3 or 4 kg, a rooster – from 4.5 to 6 kg. Preservation of mature birds – 78%, young – 96%. Many poultry farmers are some of the species, which is still present in the genetic instinct of incubation to hatching practical newborns. a breed of poultry is considered to be beneficial and profitable, because the representatives of quite unpretentious to the conditions, do not need special feeding, as well acclimatized. Of the minuses I can add quite late maturity and sexual development. These birds begin relatively late rush to adapt to the egg passes from Yurlovsky 6 or more months.

Outwardly, this great bird, have a strong constitution, broad elongated body, a large deep back, convex chest deep, especially strong in the breed, developed fleshy shoulders and long legs (often black or yellow), it gives a proud posture. In Yurlovsky vociferous hens large strong head, a massive frontal bone parts, highly placed eyebrows and deep-set eyes (brown, crimson, sun shades, depending on the feather color), so apparently the birds look very hard. At the head of the well placed pink comb, with leaf-shaped, medium-sized strong yellow beak is folded down slightly. As mentioned earlier, the eye color depends on the plumage of birds. In light closer or light brown shades of birds – bright orange or red eyes, black pen – dark brown eyes. Sami plumage color in the breed is not very diverse. Predominant colors are black, sometimes with silver transfusions, pure silver or gray, light brown. Newborn chicks Yurlovsky differ little from those of adults. They also have a birthday black bloom with little white spots in the abdominal area.