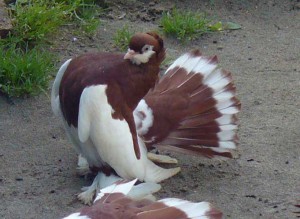 Introduced a variety of Altai Shalev pigeons compared to other species has been bred recently. In the first half of the 20th century (about twenty years) Altai Shalev birds began their own formation. Breeding pigeons breed occurred in Siberia, the main city was Bernaul, but apart from him pigeons often changed their habitat, then there are other cities nearby.

Introduced species of pigeons on a largely decorative.

The main methods of poultry are in a very captive content or kachuny.

Consider the exterior characteristics that are inherent in the breed. Altai Shalev are blue have such external features: significantly shortened trunk, which is clearly elevated in the chest area, and the outer side rather convex; dorsal part quite short, so visually it seems to lack, as if the tail starts to grow immediately to the neck area; chest deep and wide, which gives a proud posture; unusual medium neck length to the line head is noticeably reduced, giving the impression of an elongated cervical department fluffy and doves often shake them; bird legs rather short (shorter than – the more prized pigeon) and abundantly feathered feathers five-centimeter; temporal part is not very well developed, soft, cream colors, with a pronounced “powdered” effect; medium-sized, rounded head with large and prominent forehead; from one ear to the other you will notice a beautiful forelock that looks like a little bit on the small crown and more harmoniously and smoothly into the line of mane on the neck; in profile clearly visible rather short, wide near the base of the beak pale pink shades (from individual representatives met in the middle of a small raschel beak); eyes not very large, often dark colors, near the eye area are narrow and silky eyelids cream color schemes; claws beige. Altai shawl pigeons inherent fluffy and dense plumage, the main color perinok – dark red palette, light orange colors, rich blacks with white spots. Variety of different sort of “hawk” feathers. On the wings of feathers endings clearly dropped below the tail region, the area of ​​the wing flight feathers are sometimes touching the ground. The tail section has the appearance of 15 to 22 steering feathers, tail straight and raised high. Purebred representatives of this breed have a beautiful body forms that harmonious look with unusual color feathers all together to create an original look.

Altai Shalev representatives have a high level of viability. Pigeons have good parental qualities, good hatch, and then feed their babies. Special conditions for poultry do not require, and indeed they are unpretentious. Breed inherent abundant and loose tail that touches the floor, so it is advisable to keep them in a dry and clean Dovecote. In recent years, the pigeons are very popular not only in the regions of Russia, but also in other foreign countries.