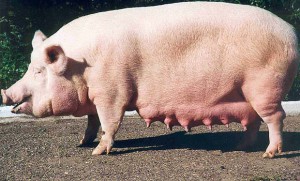 In the second half of the 20th century, on the territory of the city Urzhum (Kirov Region), a certain group that consisted of pig breeders, hobbyists, working on breeding new varieties, which, in the final outcome was named Urzhum breed pigs. The main methods by which the derivation of the species is a long crossing processes. Initially, representatives of the pig crossed that lived in the local areas with male representatives of large white breed. The next step was a careful selection of all the descendants of the union, the male representatives were to have a high level of productivity, while women in turn – intensive rearing capabilities. Ultimately, breeders managed to create a good, highly productive and most importantly, a species of pigs. Within a few years (about 1955-1958 years), recognized as independent Urzhum pigs and confirmed as a unique breed.

Originally submitted pig were quite promising and profitable for content. For some reason it were. Urzhum representatives have high endurance, quite unpretentious to the conditions of detention, characterized by an intense ripening, high quality meat, in addition to all the previously listed, pets are often used for industrial purposes, in intensive production of various system processes.

In fact, a similar kind have met before, even before the war times, but since the end of military events, the pig is actually gone. During recovery Urzhum offspring took a well-known professor of rural and economic sciences – Mikhail Lapshin, who to his team invited zootechnics named Eugene M. Terekhov, as well as a large group of different specialists and ordinary workers of breeding farms “Mukhina.”

For a long time on the territory of business premises breed yield to careful selection and selection of animals with highly productive qualities that are mandatory and typical representatives of this species. Urzhum animals from birth, grow and develop in certain climatic conditions, with limited feed resources. One factor is that the areas of pet breeding in large numbers were considered bulky types of food resources, presented gave breeders the opportunity to form a specific type of animal with beef. These pets are reasonably strong and solid constitution, the production of high, easy to adapt to the use of local forage.

Consider the exterior signs represented species. So, animals are quite large, prolonged and rather narrow trunk, large and rough bone system in the middle region of the body there is a stretch, and the front part of a more lightweight, so that the movement of animals with ease. Adult representative of the variety has a long torso from 170 to 190 cm In turn, the representative of mature feminine body has a length in the areas of 155-175 cm chest girth female reaches 90-110 cm, and male -.. 110-130 cm head. pets pretty small and the snout – a little elongated. Ear parts are heavy and noticeably inclined forward. Abdominal convex due to the fact that a well-developed digestive organs. The dorsal part of the sacrum and direct, visually very long. Legs pets powerful, not very high, and have solid hooves. Urzhum pigs often have a white suit. The dermal layer of animal abundantly covered with long, thick bristles white shades.

According to its own characteristics of productivity represented a kind refers to the direction of bacon. Weight of adult male representative waver in areas of 340-360 kg, and mature representatives – 240-260 kg. The sows of this breed have good qualities of multiple pregnancy. The level of milk yield is about 50-55 kg. Moms-pigs are also characterized by high reproductive qualities. Statistics showed that in one litter Urzhum mother able to give life to a hereditary 12-15 kids. At the age of six or seven months, babies reach the weight category of about 90-110 kg. Statistics showed that the average daily gain becomes 700-750 grams. Meat yield as a percentage – 50-60%, and tallow – 30-40%. Fat thickness at an average of 2.0-3.0 cm. The breed is characterized by high-quality meat products. Meat of animals mainly used for the production of bacon.

Currently representatives Urzhum breed pigs are popular in the Kirov and Sverdlovsk regions, the Republic of Mari El, the areas of the Perm region, a plurality of the Urals and the Volga Federal District regions.

Introduced species of pigs Urzhum has multiple advantages. These include first of all simplicity to the conditions of detention, pigs are capable of withstanding extreme climate conditions are different, they tend to quickly adapt and acclimatise. Especially well feel pets at the northern regional areas, where they are able to develop well. Sows of the variety have a calm disposition, in practice, proved excellent mothering ability and a good level of fertility. In general, the breed high-quality meat and excellent bacon product.

In addition to the positive qualities of pets, there are also some disadvantages. Minus manifested in the fact that the dorsal part of the arched slightly, sacrum parts just hanging, and productivity sometimes do not like the presence of subcutaneous fat thickness. But any breed flaws can easily cover the advantages Urzhum pigs.